The author of Tweeting with GOD

Rev Dr Michel Remery M.Sc. (1973), is a priest of the Diocese of Rotterdam, the Netherlands. He studied architecture at Delft University of Technology, and worked for the Royal Netherlands Air Force and later as an expat engineer in the Baltic States for the consulting and engineering firm Tebodin. Father Michel studied philosophy and theology at the Pontifical Gregorian University in Rome and was ordained a priest in 2004. For several years, he was a member of an advisory committee on new media and young people at the Vatican office for Internet affairs. In 2008, he completed a doctoral dissertation on the relationship between liturgy and architecture. He published various books and articles on this theme and is a research fellow of the School for Catholic Theology of Tilburg University. 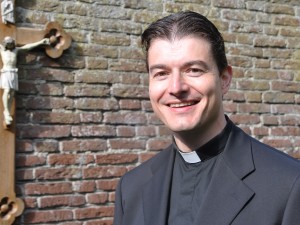 From 2006 to 2012, Father Michel served as an assistant priest at several parishes in Leiden, the Netherlands, where he worked mainly with young people and university students. This is where Tweeting with GOD came into existence. Together with the young people he made pilgrimages to e.g. Rome, the Holy Land, Krakow, Istanbul, Surinam, and to many World Youth Days. Subsequently, Father Michel served as the Vice Secretary General of the Council of European Bishops’ Conferences (CCEE) in St. Gallen, Switzerland. Among other tasks, he was the secretary of the Commission for Social Communications and the Commission for Catechesis, Schools and Universities.

In 2018, Father Michel continued his priestly mission in Luxembourg, where he is the national youth chaplain, and committed to youth ministry on an international level, in particular for Tweeting with GOD. His tasks involve supporting youth leaders, promoting an exchange of experiences and new ideas, and engaging in a dialogue with young people all over the world, especially through social media. Together with an enthusiastic team of young people he continues to develop and expand international initiatives related to youth.